We found this picture in our archives and written at the back the year was 1909…. 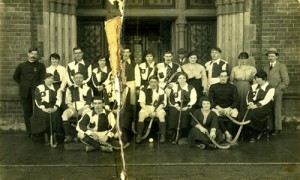 St Ita’s/Portrane Hockey Club has been in existence for almost a century. Indeed there is evidence that hockey was first played in Portrane by women, and the club has a team photograph from 1919 of a mixed Men’s and Ladies Hockey Team outside the front of St. Ita’s Hospital. The Club gained formal recognition when they entered the Men’s team into the Leinster league in 1919 following the Great War. Between 1919 and 1937 the club played in the Leinster Hockey Junior Leagues steadily climbing up the Leagues. In 1937 Portrane won the Irish Junior Cup and gained senior status in the same year. They have maintained their senior status until the present day albeit Senior 2, having been relegated from Senior 1 in the season ending 1997. 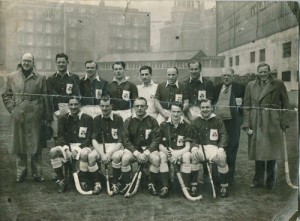 The clubs glorious years were undoubtedly the 1950’s, winning the Leinster Senior Cup on three occasions (1951, 1952, 1955). They were beaten finalists in 1954, 1958 and 1959. In that period they also won the Leinster Senior League Division 1 Title in 1952 and were runners up on four occasions during that glorious decade. They were also beaten finalists in the Irish Senior Cup Leinster Section on numerous occasions during the 1950’s. The Irish Senior Cup remains the only major trophy that alluded Portrane. P.A. Neville better known as Paddy was synonymous with this period of success and went on to represent Ireland at centre-forward on several occasions, his greatest achievement being on the successful Triple Crown team of 1947. There have been many great Portrane players down through the years but undoubtedly Paddy, a true gentleman, was Portrane’s greatest ever, and one of Ireland’s best ever hockey players. His brother John also a wonderfully gifted player gained inter-provincial honours at centre half for Leinster in that period.  The Leinster Senior Cup was again won in 1964, the Club’s last success. They defeated Avoca 1-0 under the captaincy of another brother of Paddy and John, Dick. That successful team was J Markham, T Conway (R.I.P), R Neville, W Goodwin, M Griffin (R.I.P), P Henchy, D Kelly (R.I.P), J Neville, P Hughes, P Hennessy (R.I.P) and P McMorrow (R.I.P). This team remained formidable during the 1970’s but without any major silverware except for the Senior Galtrim Cup in 1978. Between 1792 – 1974 the club went through over two seasons unbeaten at home. The hockey pitchat St. Ita’s Hospital became a formidable venue for visiting teams. This remained the case until the last senior home game in 1992.

The grass pitch and facilities on the grounds of St. Its’s hospital were something all players and visitors looked forward to. The grass pitch was always immaculate, playable and staged inter-provincial matches during the 1960’s and 70’s. For every home game both teams and visitors always enjoyed a post match meal at the Pavillions in the park. Indeed young journalists of this era requested to be sent on-duty to cover the home Portrane matches in order to benefit from the hospitality on offer. In 1979 the club donated a trophy to the Leinster Hockey Branch in memory of Paddy and John Neville, two of the Club’s greatest players. The trophy is today a prestigious senior cup competition with the final played every year on St. Stephen’s Day. In 1986, the club also presented to the Leinster Branch a trophy in memory of Eugene Mulligan. Eugene died suddenly whilst still in the prime of his life and at the time of his death was a great Portrane player. Today, the trophy is played for as the Boy’s Under-16 School’s Final.  In the late 1960’s and ‘70’s Sean Ryan represented Leinster at inter-provincial level and was a top class goalkeeper. He would surely have gained international honours but for the consistent brilliance over a long number of years of the Ulster Custodian, Alvin Carson. Percy Henchy also represented Leinster at Senior and Under 23 Level and went to gain international recognition playing at half left. He is today the chairman of the Club and has represented the Club in every capacity since 1958. As a fourteen year old in 1959, he was probably the youngest player ever to play in a Leinster Cup Final, unfortunately losing 4-2 to Three Rivers Rock, the two goals scored by Dick Neville. Andy Byrne was another great goal scoring centre forward in the late ‘70’s, throughout the ‘80’s and the early ‘90’s. Andy was a prolific goal scorer in Division 1 during an era when Portrane were not winning leagues or cups. Between 1992 and 1994 Andy converted seventeen consecutive penalty strokes. He went onto gain international honours at Under-23 and also played at inter-provincial level. His retirement in 1995 and Devin Donnelly’s transfer to Pembroke Wanderers coincided with the clubs drop to Divison 2.

The 1980’s will be remembered for the emergence of a wonderful under-age Boy’s Team. This was initiated by great vision from James Neville and Pat McCann who dedicated every Wednesday night to coaching hockey to the boys and girls of Protrane/Donabate. This took place in the hospital indoor basketball court as well as the grass facility. The boys at this time showed the most interest and they entered Leinster Branch competitions at Under 12, Under 14, Under 16 and Under 21 levels. They proved to be very competitive at these levels. Competing in and winning a lot of the Tournaments for these age groups. Successes included; Community Games Champions four years running, Under 16 Leinster Champions, Under 21 Leinster Champions, Winner of Carlow Tournament, Avoca Tournament and Pembroke Tournament. In fact, these teams won anything that was to be won at these levels. During these years many of the yound players showed themselves to be of a high standard and went on to represent both the Leinster and Irish school boys teams. Although competing with palyers from hockey playing schools, a total of eight Portrane boys represented Leinster at Under 16 and Under 18 level with Matthew McCann and Devin Donnelly going on to represent Ireland at Under-age Level. A notablr achievement during this time was the fact that Matthew McCann scored the winning goal the secured the Inter-provincial Title for Leinster at Under 16, Under 18 and Under 21 Levels. In 1995, Devin Donnelly went on to represent his country at Senior International Level, a wonderful achievement. During the late eighties, early nineties, the Ladies Section was reformed. Two Ladies teams competed in the Leinster Branch at Junior Level, under the guidance of Ultan Reilly. Unfortunately the lack of suitable facilities led to the folding of this section after a few short years. It would be a priority of the club to reform the Ladies Section if or when suitable facilities can be provided.

In the early 1990’s, hockey made the transition from grass and all-weather pitches to astro-turf synthetic pitches. Indeed, it became compulsory for all senior games to be played on astro-turf. This had a tremendous effect on hockey in Portrane as we only had the grass pitch on the hospital grounds for close on eighty years. The Club temporarily moved to the Royal College or Surgeons grounds in Santry to play and train on their synthetic pitch. This was to be a short-term arrangement while the club looked at the feasibility of getting our own synthetic pitch. Unfortunately, in 2007, we are still playing hockey outside the peninsula. There has been a significant loss of local support, not forgetting a generation of younger players who were unable to take up Hockey locally. Despite these obvious difficulties, the Club has remained Senior but without any real success apart from the winning of Senior Two League. However, one recent highlight was the unexpected capture of the Neville-Davin Senior Cup in 2004 with a memorable 4-3 win versus Weston.The squad on this occasion: Tommy O’Sullivan,(R.I.P), Ken Davis, Paul Neville, Adrain Farrell, David Eustace, Anthony Carroll, Adrian Henchy, Chris Neville, Mark McCann (Captain), Matthew McCann, Derek Ledwidge, Aidan Brehony, Ivan Eustace, Niall Davis, Stephen Neville, Ken Laird, Percy Henchy (Coach).